Scientists identify a protein that switches on allergic itching

Incessant itching is a harsh and problematic reality for eczema sufferers, causing all sorts of problems that can range from skin infections to trouble sleeping. Scientists investigating the biological processes behind the condition have uncovered a protein in the skin they say acts as a switch for itch-related neurons, offering a potential new target in the ongoing search for more effective treatments.

A number of factors can cause outbreaks for eczema sufferers, including irritants, reactions to certain foods, and allergies. The itching sensation, which often goes with other symptoms such as dryness and redness, is driven by neurons in the skin, which take their cues from sensory cells based at the root of the spinal nerves.

Researchers at North Carolina State University have been examining this pathway through experiments on mice, in which they chemically induced cases of eczema. When exposing the animals to common allergens such as dust mites, the scientists observed an increase in a skin protein called periostin, which served to greatly exacerbate the itch response.

“We have found that periostin, a protein that is produced abundantly in skin as part of an allergic response, can interact directly with sensory neurons in the skin, effectively turning on the itch response,” says Santosh Mishra, lead author of a paper. “Additionally, we identified the neuronal receptor that is the initial connection between periostin and itch response.”

The receptor protein, called αvβ3, is expressed in the skin’s sensory neurons and acts as the connector for periostin in driving the increased itch response. The team found that by switching off the receptor, they could break this important chain and “significantly” reduce the severity of the itching.

“Periostin and its receptor connect the skin directly to the central nervous system,” Mishra says. “We have identified the first junction in the itch pathway associated with eczema. If we can break that connection, we can relieve the itch.”

The research was published in the journal Cell Reports 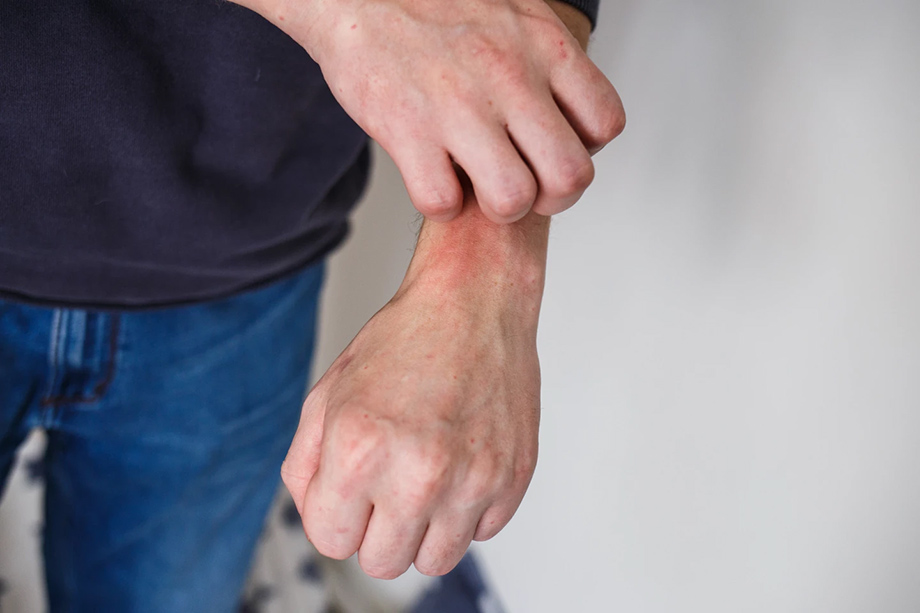